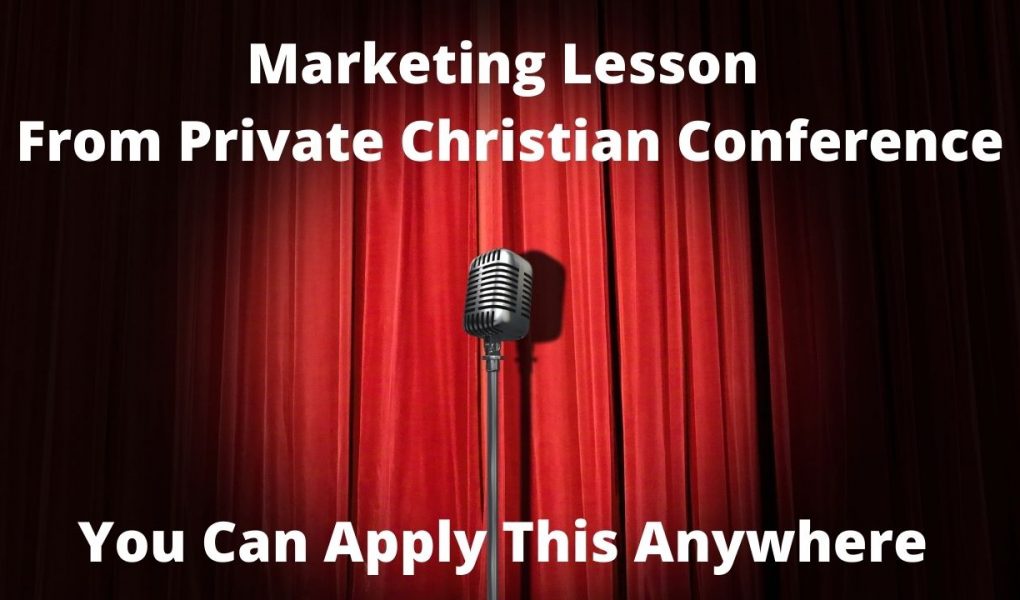 I created this site because I know there’s a lot of really good marketers out there who happened to be believers and a lot of believers who want to learn about marketing, whether it’s for their ministry, their business, etcetera, etcetera. This was created to share and to bless you.

I’m trying to post weekly, and I know there was a delay between the first and the second, and that’s because my wife and I were blessed with an invitation to a meeting in North Carolina by invite only. They invited around 150 people to The Cove. For those of you who are familiar with The Cove, you know exactly what I mean.

Asheville, North Carolina and for those who don’t know, that’s where the Billy Graham Association and the Billy Graham Training center is. They were kind enough, generous enough to invite some of the top speakers in Spanish speaking ministry for what turned out to be a three-day retreat. We got together and we were able to share with each other. It was a blessing as a marketing company to be invited there as a leader in the faith-based marketing industry.

If you haven’t been there, it’s amazing. It’s like a five-star lodge in the middle of the woods, with amazing paths for hiking. One of which leads to this beautiful chapel that Ruth Graham, Billy Graham’s wife had built. It’s a great place to pray. That was the reason they have a conference center there and that’s where we met. It was just amazing.

They covered everything. I think they have a fund for this for special events. They covered everybody’s flights and I don’t know how much that was, but guessing from the number of people, they probably spent over $60,000 just on flights to bring us in. Not to mention that they fed us.

A large select number of guests had 20 to 25 minutes each to share about what they were doing. I always thought we had accomplished a lot here at Promeza MG.   Even though we actually have done a lot. Sitting there listening to some of these people, I feel like we haven’t done anything yet.

There were influencers there that were from 20 years old all the way to legends who’ve been doing this for 50 plus years In the ministry.  I learned a lot, especially from the 20-year-old girl who was there to share about holiness. Now, that was interesting because she said it was really ironic that she had been called to share about holiness.  Yet if we read in the bible that it is actually not ironic because we know that God calls those who have lived the life of what our target audience is in, to minister to them. That way we can relate to them and help bring them into the fold.

To clear up what I mean she was preaching on holiness, and she said it’s really ironic because she grew up in witchcraft, pornography, sex, drugs, everything in between. Since she was a little girl, she was forced to participate by her parents.  She stated that only Christ could actually save and clean someone with her past and make them an example of holiness.

The networking was amazing. I have great leads to follow up on after the event. Now I’m bringing this up because I want to speak on a very important point that observed there in the conference.  I’m going to share an amazing revelation that I had there that really speaks to the work we do as marketers.

One thing I do when I go to a lot of conference, whether it’s faith based or not is I always evaluate the speakers. I want to see what kind of methods they’re doing for persuasion and what their marketing tactics are. I want to see what’s working and what’s not.  I do this because of the many things we do is try out singer on selling from stage.

We help them with their presentations and how to market themselves.? This way the burden isn’t on the churches to pay for these ministries, but the people will bless them through products and services etcetera.  I always evaluate when someone is speaking, especially people who have amazing followers and here’s what I learned.

You could be an amazing influencer, you can be an amazing inspiration, the right person who inspires people and teaches people, but it doesn’t mean you’re a good marketer. Yikes!  That sound harsh, but here’s an example.   A great legend was on stage speaking.  He’s an author of so many books teacher of so many things. I mean the guy has a huge following, I learned a lot, it was really, really great.

He finished by pitching a brand-new way that they’re going to disciple people, and they are going to do it at a huge event. The concept is fabulous.   As an idea it’s a home run in its effectiveness. I loved it from that point of view. However, as I sat there and listened to him, I realized that he was only discussing what we were going to do and what it was and what it was not.  He often stated that it wasn’t your usual conference’

As I listening to him, I realized that it just sounded like a lot of work.  For me as someone who potentially was considered going to that event, it just sounded like a lot of learning and a lot of work. This was a common feeling throughout all the presentations. In fact, there was only one presentation where I reacted with a yes! Yes! I’m excited about this!

I was monitoring my wife who was there, and she quickly told me that she was interested in that event for your teenagers. The event was a big youth event in Texas, massive youth event for Christ. The key was in what my wife said and that was,” You know what? I could see my kids going to that event and being part of that.”  Yes! Thats the key.  It was the only presentation in the whole thing where we could see ourselves at.

Why? Because this presenter not once went over the agenda, the schedule, or the stuff our kids would do. Instead, he spent the time talking about the transformation that our kids would experience.  He described our kids returning home on fire for God and being changed in ways we only dreamed of.  As parents that sold us.

As a marketer do you see what happened? He sold us with results and the vision of change.  The others dulled us with details and features.  They completely ignored the benefits. Whether its faith based or not the marketing principals are the same.  This was really brought home to me as I observed all the speakers and the response of the room.

In marketing we focus on benefits and not the features.  Once I understood this and applied these principals in my marketing, I really saw a major difference.  Now I make this a point when I help our singers and speakers construct their offers.  The right content will make all the difference.  In fact, I have a free content course that really breaks that principal down.  I truly believe it will make a difference in your marketing as it has done on mine.  In fact, I believe in this so that I will also make these breakdowns available to you.  Just click here for that free content breakdown.

We use cookies on our website to give you the most relevant experience by remembering your preferences and repeat visits. By clicking “Accept All”, you consent to the use of ALL the cookies. However, you may visit "Cookie Settings" to provide a controlled consent.
Cookie SettingsAccept All
Manage consent

This website uses cookies to improve your experience while you navigate through the website. Out of these, the cookies that are categorized as necessary are stored on your browser as they are essential for the working of basic functionalities of the website. We also use third-party cookies that help us analyze and understand how you use this website. These cookies will be stored in your browser only with your consent. You also have the option to opt-out of these cookies. But opting out of some of these cookies may affect your browsing experience.
Necessary Always Enabled
Necessary cookies are absolutely essential for the website to function properly. These cookies ensure basic functionalities and security features of the website, anonymously.
Functional
Functional cookies help to perform certain functionalities like sharing the content of the website on social media platforms, collect feedbacks, and other third-party features.
Performance
Performance cookies are used to understand and analyze the key performance indexes of the website which helps in delivering a better user experience for the visitors.
Analytics
Analytical cookies are used to understand how visitors interact with the website. These cookies help provide information on metrics the number of visitors, bounce rate, traffic source, etc.
Advertisement
Advertisement cookies are used to provide visitors with relevant ads and marketing campaigns. These cookies track visitors across websites and collect information to provide customized ads.
Others
Other uncategorized cookies are those that are being analyzed and have not been classified into a category as yet.
SAVE & ACCEPT